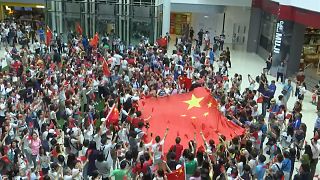 Hundreds of pro-government protesters in Hong Kong waved Chinese flags and sang the Chinese national anthem several times on Friday, breaking out into cheers at the end of each rendition.

The protest took place in the Olympian City shopping and residential complex in West Kowloon.

The crowd was spirited but far smaller in size than the throngs of anti-government protesters who have taken to the streets for months.

Those demonstrations began in June over an extradition bill that would have allowed some criminal suspects to be sent to China for trial.

Many saw the bill as an example of Hong Kong's autonomy eroding since the former British colony returned to Chinese rule in 1997.

The government last week promised to withdraw the bill, but the protesters' demands have widened to include direct elections for their city's leaders and police accountability.