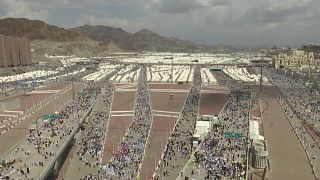 Final day of pilgrimage for millions at Saudi

Around 2.5 million pilgrims took part in a symbolic stoning of the devil on Tuesday for the final day of pilgrimage for this year in Saudi Arabia.

Pilgrims carried umbrellas and moved under the scorching sun in Mina to throw the pebbles on the devil's pillars.

The five-day hajj pilgrimage is required of all Muslims once in their lifetime if they are financially and physically able to make the journey.

Muslims around the world commemorate the end of hajj with Eid celebrations, including distributing meat to the poor.

Egyptian pilgrim Amer Mohammad said after throwing the last pebbles that his heart was full of happiness because he was able to complete the pilgrimage.

Speaking at a news conference, Emir of Mecca Khaled al-Faisal confirmed that more than two million pilgrims had come for the hajj this year, including 1.85 million from overseas.

Al-Faisal added that the leadership of the kingdom planned to transform Mecca into a smart city in the coming years.

The hajj is one of the largest religious gatherings on earth and a massive logistical challenge for the Saudi government to oversee each year.

The kingdom provides pilgrims with health care and buses for transportation, as well as meals, snacks and water along the routes of hajj.