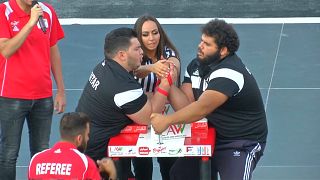 Fifteen-year-old George Bejjani became the youngest contestant to ever win the title in Lebanon's arm-wrestling championship in the +90kgs category for men.

The event crowned winners in different categories including men over 90kgs, men under 90kgs and women.

Five women finalists competed for the 2019 title, with 16-year-old Jessica Bejjani crowned champion. She encouraged women to try out the sport, rather than shy away from it.

Arm-wrestling in Lebanon had been just a pastime for many years but after establishing a federation and introducing nation-wide competitions, it became a professional sport in the country.