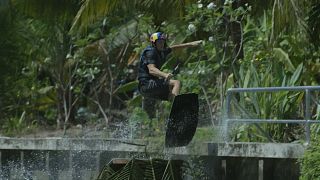 The two-time wakeboarding world champion is seen riding under and leaping over walkways in the Thai capital.

Gührs, who typically spends his winters training in Thailand, said being the first to ride in such an area is a dream come true.

The video is part of a three-part series called 'Searching Bangkok' in which Gührs explores the country's food, sport and culture in between his time spent wakeboarding.