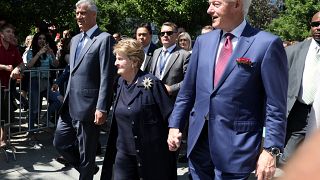 Kosovo celebrated the 20th anniversary of the deployment of NATO troops in an operation that helped stop a Serb military crackdown on ethnic Albanians that left more than 10,000 dead.

Former US President Bill Clinton, ex-Secretary of State Madeleine Albright and ex-NATO commander Wesley Clark were joined by other world leaders in the capital, Pristina on Wednesday.

Cheered by a crowd of 3,000 in central Skenderbeu Square, Clinton said it had been "my life's biggest honour to have stood with you against ethnic cleansing and for freedom."

It declared independence from Serbia in 2008, but Belgrade does not recognise it and relations remain tense.