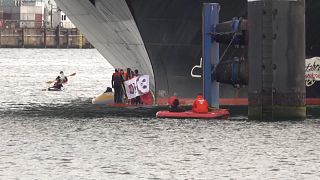 The group of climate change activists called "Smashcruiseshit" took action this Sunday at the port of Kiel in Germany in a protest against the damages caused by cruises to the environment.

The group blocked a cruiser, the "Zuiderdam" run by Holland America that was moored there and prevented it from leaving for hours. Some of the activists climbed the ship's bow and mooring lines.

The activists considered their protest a success and announced more actions: "There is no quiet place for the climate destroyers". It says in a statement. They demand an end to the entire cruise industry.