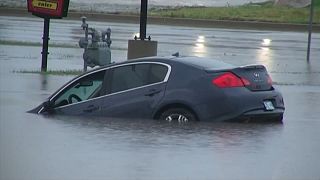 Stranded motorists had to be rescued after flash flooding hit Oklahoma City in the US on Thursday.

Up to 3.8 centimetres of rain fell during a 30-minute period in the western part of the city, according to the National Weather Service.

This latest band of storms follows bouts of severe weather that killed at least six people in Oklahoma, including two when a tornado ripped through a mobile home park in El Reno.

Flooding along the Arkansas River swamped homes and businesses in the Tulsa area and downriver into Arkansas.