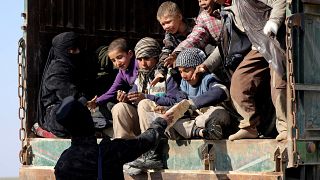 Hundreds of people evacuated from last ISIS stronghold in Syria

Syrian Kurdish fighters released footage of hundreds of men, women and children being evacuated on Monday night from the last stronghold of the so-called Islamic State (IS) group in Syria.

The evacuation comes amid a standoff between the Islamist militants and the US-backed Syrian Democratic Forces (SDF) besieging them in a small sliver of land along the Euphrates river.

The evacuees arrived in more than 40 trucks from Baghouz, where about 300 IS fighters are believed to be holed up with civilians in a dramatic final showdown.

SDF fighters helped the evacuees off the trucks before they were searched and screened. The men, including dozens of foreign IS supporters, were separated from the women.

Thousands of civilians have evacuated the area in recent weeks and have continued to do so at a slower pace in the past few days, delaying an announcement of the extremist group's territorial defeat in Syria.