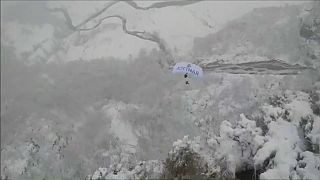 Milk protests and daring jumps: No Comment of the week

Farmers and shepherds on the Italian island of Sardinia have been pouring their milk away this week to protest the recent fall in prices.

Thousands of litres were dumped from an overpass onto a motorway in the town of Ozieri on Monday as part of the ongoing demonstration. Producers are currently getting just 50 cents for a litre of milk.

Meanwhile, in China’s Ganzhou City, cherry blossoms were in full bloom on Tuesday, bringing a sea of pink to an already scenic park.

Elsewhere in China, hundreds of boats were stranded in a frozen sea in Liaoning province on Wednesday amid a cold front.

On the snowy Scottish mountains, daredevil athlete Tim Howell performed a series of breathtaking base jumps.

All of the jumps were achieved in the space of a week in harsh Scottish winter conditions on behalf of an outdoor clothing brand.

Vietnam incense village dazzles ahead of Lunar New Year, though sales down