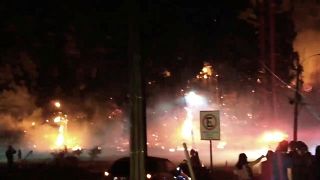 Local media reported there were 32 active blazes in several regions in south Chile ON Wednesday. Another 48 fires were under control and six more had been put out.

Residents in the town of Concepcion, 320 miles (515 kms) south of Santiago, were seen trying to remove belongings such as furniture from their homes.

Many were surprised by the magnitude of the different fires but winds had made the task to put them out more difficult.

Evacuations were underway. Helicopters flew over the affected area, dropping water on to fires.