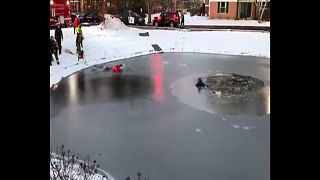 Emergency responders rescued a boy after he fell through an icy pond in Illinois on Sunday.

Crews arrived within minutes after a 911 call was made around 4:55 pm local time in Naperville, 53 kilometres west of its city, Chicago. The 11-year-old boy told first responders that his feet were stuck in the pond's muddy bed.

A member of the fire department filmed the rescue attempt, showing the ice breaking immediately after a rescuer attempts to move towards the boy. A rescue disc was thrown to the child before he was pulled to safety.

The boy was taken to a hospital and is in a stable condition.