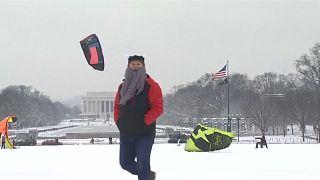 Snow lovers in Washington DC celebrated the region's first major snowfall of the year by lobbing snowballs at one another on Sunday afternoon, in what has become a recent post-snowstorm tradition in the US capital.

No stranger to crowds, the area around the Washington Monument turned into a free-for-all battleground as residents and tourists charged at each other, armed with fistfuls of the white stuff.

Washington was forecast to receive almost a half foot of snow, forcing airlines to cancel over one hundred flights leaving Reagan National Airport on Sunday morning.

The winter storm rolled into the region after dropping more than a foot of snow on parts of the Midwest and killing at least seven people in highway accidents on Saturday.