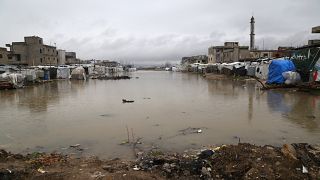 The overflow of muddy sewage water caused by the storm was running like a river in the streets of Beirut. People just stood and watch as it rushed past.

There is no stopping it. Buses were stranded as the water level rose and people headed for higher parts of the pavement to save themselves.

The storm, dubbed "Norma", began on Saturday and was expected to reach its peak later on Tuesday.