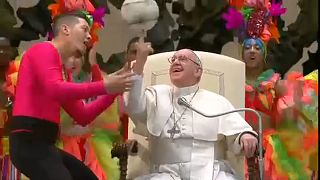 Was joining a circus in the Pope’s New Year’s resolutions?

Pope Francis impressed everyone on Wednesday (January 2) with his football twirling skills, helped by a group of Cuban circus performers who joined him at his weekly general audience in the Vatican.

It is not clear whether the ability to rotate a ball at the end of his finger had been on the Pope's New Year resolution list but he certainly entered into the spirit of things with gusto.

Some 20 performers from the Circo Cuba danced and carried out acrobat moves to salsa music as the pope looked on smiling.

At the end of the performance, the group got a double thumbs up from the pontiff who later told the team to keep up their good work bringing beauty to the world.