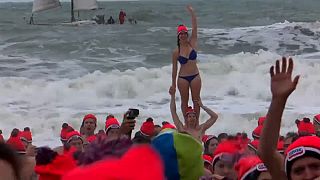 Thousands of Dutch revellers braved cold water and chilling winds on Tuesday to take a New Year's Day plunge in the North Sea.

In the coastal district of Scheveningen, people jumped into the sea as part of a tradition thought to date back to the 1960s.

Nowadays, the event is now held as a charity fundraiser with each swimmer required to buy a ticket.

According to event organisers, 10,000 people took part in the Scheveningen plunge alone.

Due to strong wind, it felt like five degrees, the organisers said.

More than 60,000 people were expected to take part in similar events on 24 locations across the Netherlands.