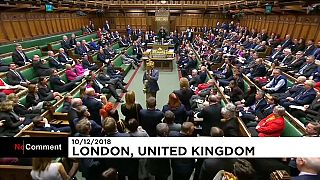 Members of British Prime Minister Theresa May's cabinet on Tuesday (December 11) were confident she would be able to get a Brexit deal through parliament despite postponing a vote she acknowledged she would lose.

However, a member of parliament from the opposition Labour Party, Lloyd Russell-Moyle, lifted the ceremonial mace in the House of Commons on Monday (December 10) to vent his anger after May announced she was delaying the vote.

The mace represents the Queen's authority in Parliament and picking it up caused outrage amongst Conservative lawmakers which prompted the house speaker to order Russell-Moyle to leave the House of Commons.