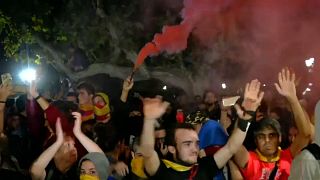 Catalan police used batons and rubber bullets to control protesters after some waving yellow, red and blue separatist flags and chanting 'October 1, no forgiving, no forgetting' surrounded the regional parliament and displayed posters reading "Republic under construction" whilst others threw paper planes and objects at police outside the Spanish national police building.

During the day there were short-lived attempts to block roads and train tracks in the Spanish region, and around 180,000 people marched in Barcelona, hanging ballot boxes and chanting the regional anthem.