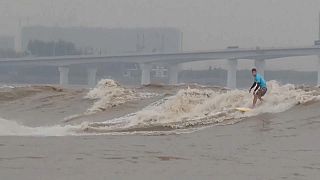 Surfers from around the world have gathered to ride the tidal bores of the Qiantang River in east China's Zhejiang Province recently.

Surfers from countries including United States, South Africa and Indonesia took part in a three-day surfing competition in the city of Hangzhou, carving through the waves and demonstrating their skills.

Meanwhile, thousands of people gathered along the dam of the Qiantang River on Thursday to see a rare phenomenon - a crosstide, which is usually caused by large obstacles in the middle of the river splitting the tide. The two branches then form the shape of crosslines.