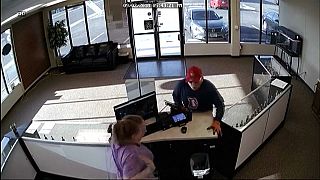 A man's attempt at an armed robbery at a store near Denver, Colorado didn'´t quite go as planned.

Security camera footage from the E-Cig store in Aurora shows a man entering the store with a gun but dropping it behind the counter, then running off after failing to climb over the counter to get it back.

The incident happened on September 2 and was shared by the Aurora Police Department, who are asking the public to help identify the man.