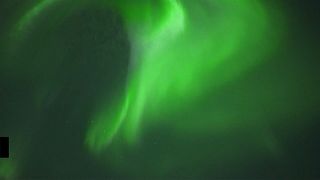 The auroras could be seen lighting up the skies above the northern Finnish city of Rovaniemi just before midnight, and according to a local Northern Lights photographer, this was the best display of Auroras Borealis at the start of what will be a good season for aurora watching.

The Northern Lights, also known as Aurora Borealis, are a result of electrically charged particles from the sun entering the Earth's atmosphere.