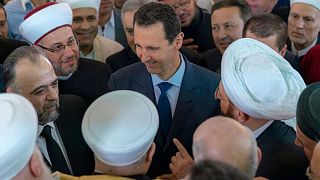 Syrian state television showed Assad arriving at the al-Rawda mosque. Muslims around the globe are celebrating Eid al-Adha, otherwise known as the Festival of Sacrifice.

The five-day holy festival will end on August 25 and celebrates the story of the prophet Ibrahim, whose faith was tested when God asked him to sacrifice his only son.

Sheep and lambs are slaughtered during the festival and distributed to the poor and their families.

Eid al-Adha is known as the holiest holiday in the Islamic calendar, with the first day of the festival coinciding with the end of the Haj pilgrimage to Mecca, Saudi Arabia.