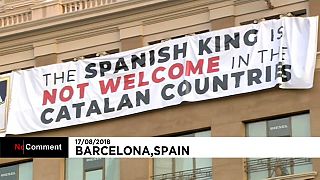 The King arrived to pay tribute to those who lost their lives in the Barcelona terror attack one year ago.

Pro-independence protesters hung a banner from a building in the city centre to show their objection to his visit.

The families of the victims had asked for a truce between the regional pro-independence government and the Madrid government ahead of the anniversary of the tragedy.

In August 2017, a man driving a truck killed 14 civilians and injured over 100 when he rammed into pedestrians on La Ramblas in central Barcelona. Two civilians later lost their lives during the attacker's escape and in Cambrils the following day.

Families and friends of the victims laid down flowers on the boulevard to mark the anniversary of the tragedy.