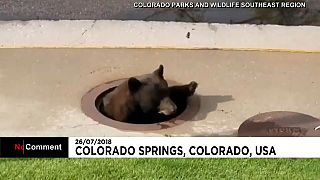 Bear climbs out of manhole

Utility workers in Colorado Springs were alerted to a bear stuck underground.

You see it here poking its head up through a manhole... checking out the surroundings before making an escape.

Apparently, it had been attracted to an opening in the storm drain by a garbage can filled with trash and branches from a tree filled with berries. But thanks to those who came to its aid, the light at the end of the tunnel meant instant freedom.