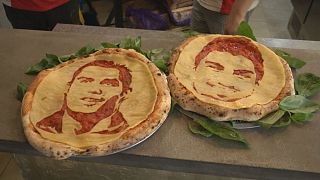 The art of pizza

A restaurant in St Petersburg has found a delicious way to get into the World Cup spirit - pizza featuring the faces of soccer legends Cristiano Ronaldo and Luis Suarez.

Chef Valery Maksimchik has combined his love of soccer and art to create edible portraits of two players that are soon to meet face to face on the pitch in a last 16 game at the World Cup.

Each soccer pizza takes nearly two hours of careful stencilling and cutting. Maksimchik's art doesn't go directly into a pizza oven, rather the dough is cooked before the stencilling process and the cheese allowed to gently melt into position. Customers at the HopHead Tap Room bar on Friday (June 29) were treated to a rare sight of the pizza being made before getting a chance to truly consume Maksimchik's art.

Customers who are also soccer fans were keen to get a bite out of Suarez, with one exclaiming: "It really does have a bite!"

Maksimchik says he hopes his art shows his love for soccer and vows that if Russia wins this year's tournament he will cook a pizza portrait of each member of the national team.