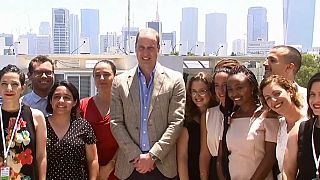 The Duke of Cambridge met Netta Barzilai, winner of this year's Eurovision song contest, and had a cold drink at one of the famous kiosks along the boulevard named after the late 19th-century British-Jewish banker and philanthropist.

Thousands of onlookers gathered behind police barriers to catch a glimpse of the prince.

The prince casually smiled and waved before attending a cultural event at a museum where he met young people engaged in youth activism.