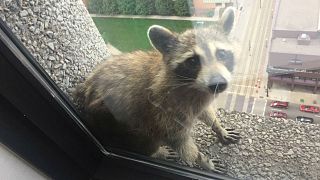 A raccoon in the US became an online sensation on Tuesday when it spent almost 20 hours scaling a 25-storey office tower. Video footage captured the animal making it to the top of the building unscathed before it was rescued and released into the wild.

A Russian cat called Achilles, who is reputed to have psychic powers, on Wednesday successfully predicted that Russia would win the opening match of the World Cup the following day.

The prediction came as football fans from around the world descended on Moscow for the biggest tournament in the sport.

Police in Bolivia fired tear gas and water cannons at university students and professors protesting for more funding for public education on Wednesday.

Floodwater filled the streets of Salies-de-Béarn and other towns in the southwest of France on Thursday, submerging cars and forcing people to evacuate their homes.