Did you know that inequality is rising? This is because the top 20% of Europeans earn five times more than the bottom 20%?

While the impact has been felt the most in countries like Romania and Portugal, it's also been felt in Italy, and even in Germany.

Minimum wages are different for families across Europe. To better understand the lay of the European landscape, here is our crash course.

The minimum wage has varied very little in most of the high wage category countries:

Fighting to keep their youth

This trend is happening across Europe, from countries ranging from Austria to the Czech Republic, the Netherlands, and even Lithuania, where young people are leaving in droves for countries which can give them better incomes.

This is particularly a problem in a country like Latvia, where wages are at four euros an hour, about three times less than the hourly wage across the EU. The disparity is leading more and more young Latvians to migrate in search of better opportunities.

To try to stem the flow, in January this year, the Latvian government increased the minimum wage to 430 euros a month. This is one way to help the lowest-income groups in a country that itself is deeply divided in terms of wages and job prospects, with huge disparities between the capital, Riga, and other areas of the country.

"If you take a measure of income like GDP per capita, in Riga that would be a level that is similar to the UK on average. If you take the Eastern Provinces, just a 4-hour drive away, the level of GDP per capita would be like South Africa," explains Vjačeslavs Dombrovskis, Chairman of the Certus Policy Think Tank Board.

Dombrovskis also explained to Euronews' Charlotte Kan that unemployment follows a similar trend, at 4-5% in the capital Riga, it shoots up to 18% in the eastern region of Latgale.

Another tactic put in place by the government to keep its youth at home is education, which in Latvia has a higher impact on wages and job prospects than in many EU countries. Particularly appealing are training courses in information and communication technologies that have promising job prospects.

"It's a growing industry: the government is investing because commercial rules and tax laws are more competitive [in Latvia] than in our target markets," says Janis Rocens, president of the leading IT services exporter SWH SETS. "The outlook for an ICT company like ours in Latvia is 100% positive," Rocens added.

With higher wages, up-skilling for better career prospects, and even a Ministry of the Diaspora to stem the flow of youth departures, Latvia is attempting to put in place lasting solutions to offer youngsters a better future and to save its population from inexorable decline.

So how do you tackle a problem like inequality on a European scale?

She began by asking Visentini what object he had brought to signify the inequality Europe is facing today.

I've got this nice bicycle. I received it as the first gift after I was elected general secretary of the ETUC in 2015, and you know it is a symbol of my way to equality. I have to cycle, I mean, to get to equality, and I decided to put in the basket of the bicycle my social security card: in Belgium that is not something that everyone can get and benefit from. And so, let’s say it’s also another symbol of the long way we have to go to reach real equality, even in a well-developed country like Belgium in terms of social protection and social rights.

Do you really think that inequality effects the growth of countries?

Absolutely! It depresses productivity and competitiveness, and it doesn’t make the labour market efficient. Unfortunately for public budgets, a lot of money has to be spent to support precarious workers: people that cannot get a pension at the end of their careers, who cannot get any unemployment benefits, who are in a poverty situation with their families, so they have to be supported by public assistance. So this takes out available resources for investment. So, in the end, it’s a vicious circle that destroys the growth potential of the economy. 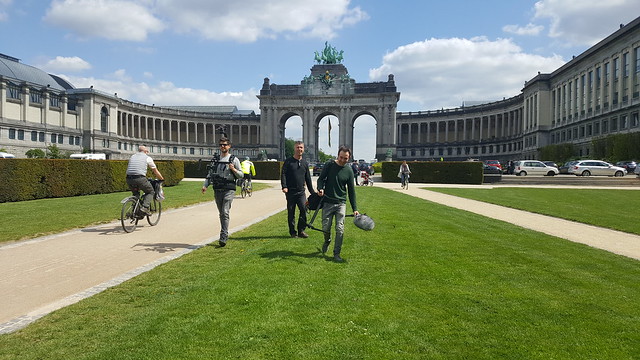 Do you think that that’s the issue, that there seems to be a weakening in collective-bargaining across Europe?

The problem is not that the unions aren't strong anymore, the problem is that collective-bargaining systems have been attacked during the austerity measures and the crisis, and the fact that collective-bargaining institutions have been dismantled leads to weak trade unions, but also to weak employers' associations as well. And when social partners are weak, well it’s very difficult to manage the evolution of the economy in such a way that you reduce inequalities.

Well, you would say that you are the head of the unions in Europe - but when you compare it to the world – globalisation puts wages under pressure just by its very nature.

Well you know, if you look at the company and of the costs of production and exports, the wage component is very low: 5 to 15% – all the rest is investment, particularly in technology, innovation, digitalisation, automation of the processes, but also the quality of the production. These are really the elements that make the difference in terms of global competition. Export is half the picture: the other half of the picture is actually internal consumption. Internal demand. If we increase wages in line with productivity we boost exports, but at the same time we also boost internal demand and we make our economic growth model really sustainable in the long run. If social partners are part of the picture they can be part of the solution. If we can get that we can well regain trust in the European Union.