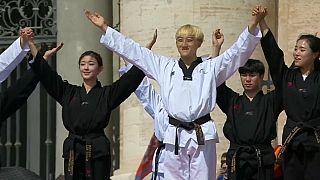 South Korean taekwondo athletes on Wednesday performed for Pope Francis after a planned show of Korean unity at the Vatican fell apart when the North pulled out at the last minute.

Pope Francis didn't seem to notice or mind, thanking the athletes Wednesday "for their exhibition which was a show of the will for peace, the two Koreas together".

The performance had been planned as a ceremony to open the World Taekwondo's Grand Prix competition this week in Rome.

The South's team performed for thousands of people in St. Peter's Square, and featured a young girl releasing a dove in a sign of peace.