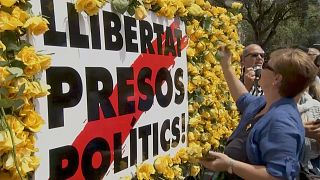 Political discomfort bloomed in Catalonia on Monday as thousands of Catalans gifted their partners with yellow roses during Sant Jordi, the annual celebration of the region's patron saint.

Catalans have a tradition of giving a red rose to mark the day but in a sign of protest against the imprisonment of pro-independence leaders, this year many decided to gift yellow roses as a simile of the yellow ribbons used in the demonstrations to show support to the jailed politicians and activists.

Catalan parliament speaker Roger Torrent joined the demonstration by hanging a yellow rose from a fence with a banner demanding the release of people they consider political prisoners.

Spain claims the Catalan leaders are not political prisoners because they broke the constitution when they held a banned referendum on independence.

During Sant Jordi, women give a book as a gift to men while they give a red rose to their partners.