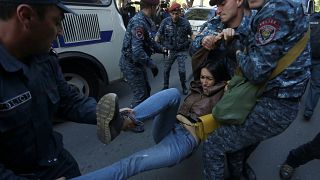 Sarksyan's appointment has drawn criticism from political opponents, who accuse him of engineering a power grab.