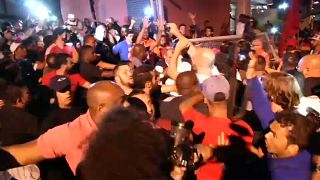 Supporters of former president Luiz Inacio Lula da Silva joined demonstrations to prevent him from leaving a building in São Paulo to begin his prison sentence for corruption.

Lula had earlier announced he would turn himself in, but also maintained his innocence and argued his corruption conviction was simply a way for enemies to make sure he does not run for re-election in October.

Dozens blocked a gate where a car carrying him tried to leave the building.

He eventually left and travelled to the prison cell from which he will fight an appeal against his conviction.