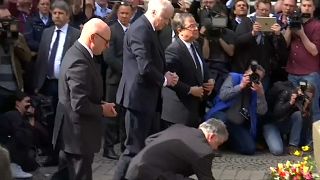 German investigators were trying to work out why a man drove a camper van into a group of people sitting outside a restaurant in the western university city of Muenster on Saturday (April 7), killing two people before shooting himself dead.

The vehicle ploughed into people seated at tables outside the Grosser Kiepenkerl eatery, a popular destination for tourists in the city's old town. The perpetrator shot himself after crashing the silver-grey coloured van into the outside area of the restaurant, police said.

Forensic police combed the scene on Sunday after investigators named the victims as a 51-year-old woman from the Lueneburg area in northern Germany and a 65-year-old man from the Borken area near Muenster.

The Frankfurter Allgemeine Zeitung reported in its online edition that the perpetrator was Jens R., 48, who resided some 2 km (1.2 miles) from the crime scene