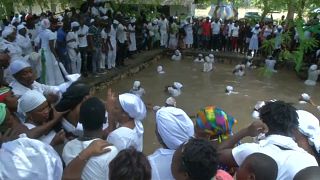 Hundreds of Haitian voodoo followers gathered on Sunday to show their devotion to their gods through animal sacrifices, music and dance.

Dressed in white to symbolise their adherence to voodoo, they emerged from the rituals blood-stained.

Devotees danced to the sound of drums as they celebrated the religion brought to Haiti by slaves from West Africa and fused with traditional Catholic elements during the colonial era.

One by one, participants are reportedly possessed by spirits and then fall into water where they continue worshipping.

Millions of Haitians believe in voodoo which was first recognised by the government in the 1960s.