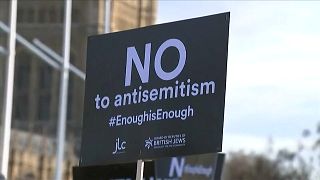 Protest as UK Labour leader under fire over anti-Semitism stance

Hundreds of protesters gathered outside the British parliament on Monday to protest what they called anti-Semitism within the Labour party.

Jewish community leaders have accused the party's leader Jeremy Corbyn of siding with anti-Semites and not doing anything meaningful to stamp it out within the party.

Demonstrators were calling for Corbyn to resign as they shouted "shame on you".

The protest was organised by the Board of Deputies of British Jews and the Jewish Leadership Council.