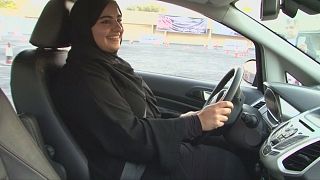 Women at Jeddah's Effat University took their first driving lessons on Wednesday, March 7, ahead of the lifting of the ban on women driving in Saudi Arabia.

Women will be legally allowed to drive in June and thousands are signing up to driving schools across the kingdom.

Saudi Arabia's Crown Prince Mohammed bin Salman ordered a lift on the ban in September, a conservative tradition that has limited women's mobility and has been seen by rights activists as an emblem of their suppression.

The conservative kingdom had been widely criticised for being the only country in the world that bans women from driving.

Women activists had campaigned for more than 25 years to be allowed to drive, defiantly taking to the road, petitioning the king and posting videos of themselves behind the wheel on social media. The protests brought them arrest and harassment.

When the decree lifting the ban was announced by Saudi ambassador to Washington, Prince Khaled bin Salman, who said women would not need permission from their guardians to get a license or have a guardian in the car and would be allowed to drive anywhere in the kingdom, including the Islamic holy cities of Mecca and Medina.

However women still face a bumpy road in the kingdom, with approval from male guardians needed in the fields of education, employment, marriage, travel plans and medical treatment.