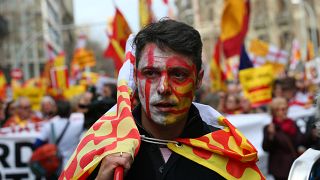 Thousands of Spaniards joined a rally in Barcelona called by a grassroots group that uses humour to mock Catalonia's separatist push.

The group facetiously calls for the division of Catalonia into two parts.

One would be for separatists who want to leave Spain and the other for those who want to remain a part of Spain, which would include the cities of Barcelona and Tarragona where unionist support is strong.

The group's barbs include the slogan "Barcelona is not Catalonia," which twists the separatist slogan "Catalonia is not Spain."

Secessionist lawmakers in Catalonia unsuccessfully tried to declare independence from the rest of Spain in October, but they maintained a slim majority in the regional parliament after an election in December.

The separatist movement has created Spain's most serious political crisis in decades.