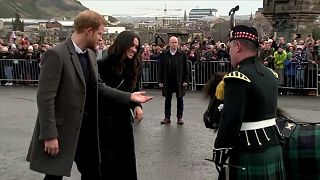 Prince Harry and his American fiancee Meghan Markle, who was dressed in a Scottish tartan coat, were welcomed enthusiastically in Edinburgh on Tuesday (February 13) on an official joint visit to Scotland ahead of their marriage in May.

Crowds who had waited hours in the cold outside Edinburgh Castle, which dominates the skyline from a rock in the city centre, were thrilled with the smiling couple.

Markle wore a Black Watch tartan coat, one of the checked fabrics associated with Scottish traditional dress and bearing the name of the Black Watch, the Royal Regiment of Scotland.

Harry, 33, and Markle, 36, were officially welcomed to the city by the Royal Marines Scotland Band at the castle, where they observed the firing of the one o'clock gun, a tradition that dates back to 1861.

Queen Elizabeth's grandson, fifth-in-line to the throne, and Markle, previously the star of the U.S. TV legal drama "Suits", announced their engagement last year and will be married on May 19 at Windsor Castle.