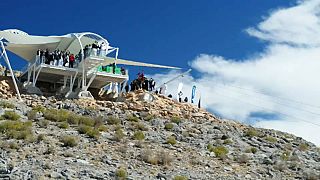 ‘The Jebel Jais Flight’ has officially opened on top of the UAE’s highest mountain, Jebel Jais in Ras Al Khaimah.

Guinness World Records confirmed the length of the Jebel Jais zipwire at 2.8 kilometers – the equivalent to over 28 soccer fields – which beats the previous 2.2km world record in Puerto Rico by a full 600 meters.

Thrill-seekers will be suspended above the mountain as they prepare to take the flight headfirst in a ‘superman’ style position.

The zipwire will be able to accommodate 200 people a day