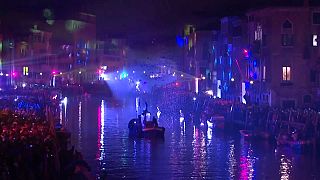 The city of Venice kicked off its carnival season with a spectacular circus performance on the Cannaregio Canal on Saturday.

Inspired by Italian Film Director Federico Fellini, the flotilla was complete with inflatable animals, a tightrope walker and fire eaters.

Thousands of people from all over the world lined the banks of the canal to see the opening performance while thousands of others got blocked outside by police who said the area was becoming dangerously overcrowded.