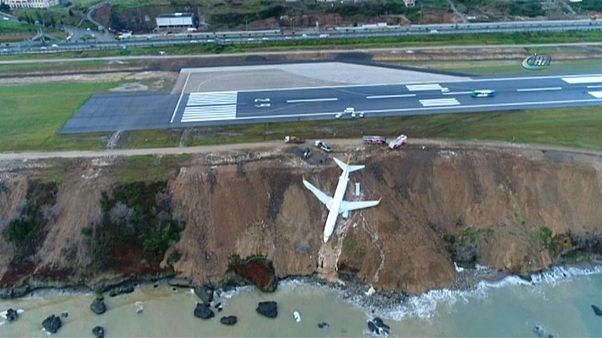 No victims as Boeing narrowly avoids plunge into Black Sea

A Pegasus Airlines plane skidded off the runway of a Turkish coastal airport and ended up halfway down a steep slope into the Black Sea, but no passengers or crew were hurt, Turkish media reported on Sunday, (January 14).

Amateur video captured passengers in the plane waiting to be evacuated and fire fighters spraying water onto the plane after the incident happened late on Saturday, (January 13), night at Trabzon airport in northeast Turkey.

Pegasus Airlines said in a statement that the Boeing 737-800 aircraft, flying from Ankara to Trabzon, "had a runway excursion incident" as it landed but the 162 passengers, two pilots and four cabin crew were unhurt