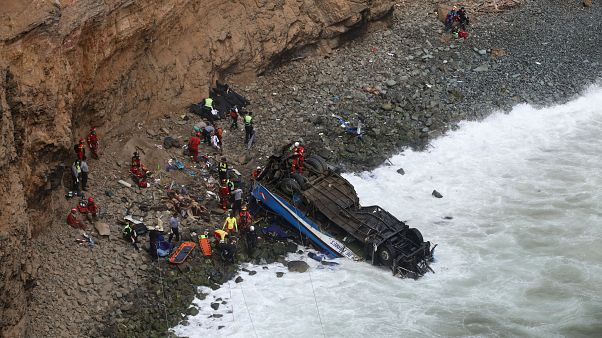 According to the police, 36 bodies were transferred to the morgue of the town of Chancay, while another 12 bodies were still trapped inside the bus.

Six survivors, who are suffering from serious injuries, were evacuated to hospitals in cities of Lima, Callao and Chancay.

The bus was carrying 57 passengers when it crashed into a trailer truck around midday and skidded off the road about 48 km north of Lima, in a location known as Pasamayo.

Officials said earlier that the trailer truck had invaded the wrong lane and was to blame for the accident.

Images of the crash site showed the wreckage of the bus landing upside down on a rocky shoreline, some 100 meters below the highway.

The tragedy occurred at a dangerous turn in the road known as the "Devil's Curve."

Firefighters and police officers, as well as two helicopters and a patrol boat of the Peruvian Navy, joined the rescue effort.

Road accidents are common in Peru because of unsafe highways.