The V4 states never acknowledged that for an EU-wide problem, there can be only an EU-wide solution

As the migrant crisis has been at least partly brought under control by the joint EU actions, the effects of the disastrous year of 2015 still reverberate in public and expert debates all over Europe.

The discussions are marked by a huge diversity of opinions, very often not based on facts. One of the most recent examples being an article by Bill Ravotti. It is not the aim of this contribution to rectify the factual errors that form part of this and other arguments but to highlight few common lines of thinking that have aimed to posit the V4 in the role of victims of “Germany, Sweden, migrant activists and the EU bureaucrats.”

One underlying assumption, frequently encountered is that the "German" policy of open borders and quotas adopted by the EU have destroyed any sense of European security and opened the EU to mass immigration from conflict-ridden less developed states. Amid this “chaos” the only rational players are the V4 countries [Hungary, Poland, Slovakia and Czech Republic] that from the onset of the crisis have played a constructive role in trying to get it under control. This is far from reality.

Firstly, among the nationalities eligible for relocation, you won´t find Afghanis or Iraqis anymore, for example. The quotas are aimed at those who suffered most: the Syrians. So the claim that the security of the receiving states is severely compromised goes simply too far and doesn't correspond to the situation.

The frequently criticized policy of open borders was an unfortunate but swift and effective reaction to a situation where around hundreds of thousands of refugees were stuck in Hungary.

It ended as soon as it was clear that any conflicts arising from huge migrations streams to the Balkans and possible clashes there had been prevented. What were the V4 States doing during this time? Scolding the EU, adopting strictly national measures and distancing themselves from an EU-wide solution which only exacerbated the problem on the European level and didn't help a single bit.

In the ensuing years, the role of the V4, of course, has been more active. While opposing the rational arguments for admissions of a limited number of security-cleared refugees, it is fair to say that the Czech Republic and other V4 countries have been sending resources and medics to support the worst affected states. But it is right to point out that only thanks to the huge deal with Turkey – worth €3 billion and dwarfing any similar measures from individual nations - has the EU managed to make a significant change in migration flows. 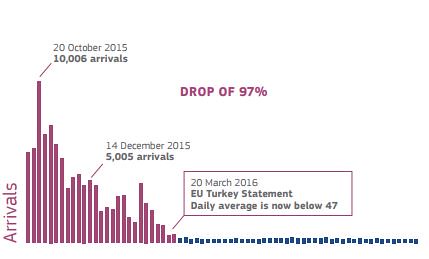 The migration issue is basically the only thing in recent years that has managed to glue the V4 together (Slovakia being an exception). So to speak of any established “Central European Defence Cooperation” is an exaggeration, to say the least. The CEDC does not even have an established website, the only activity so far – apart from ministerial discussions - has been a joint military exercise in Austria. It would be great to see a constructive, united V4-approach but unfortunately, nations mired in nationalism (Poland and Hungary) or propaganda-fuelled euro-scepticism (Czechia) are rarely able to unite behind a constructive stance based on solidarity.

Barbed wire is not the answer

While the national borders crumbled one after another in 2015 under the immense pressure of immigrants, it has become clear that not even a hundred barbed-wire fences on national borders would stem the inflow of immigrants. Unfortunately, the V4 states never acknowledged that for an EU-wide problem, there can be only an EU-wide solution. Quotas have been far from the best solution but as a symbol of empathy with Greece and Italy, they could have worked: if only Czechia, Hungary or Poland accepted a handful of Syrian immigrant children as a gesture and a symbol…then it would have been time to say thanks.

Lukáš Pokorný is the co-editor of the Nova Evropa website, FB Page Jsem Evropan and a blogger on EU issues.

The views expressed in opinion articles published by Euronews do not represent our editorial position. If you want to contribute to our View section, email ideas to: view@euronews.com