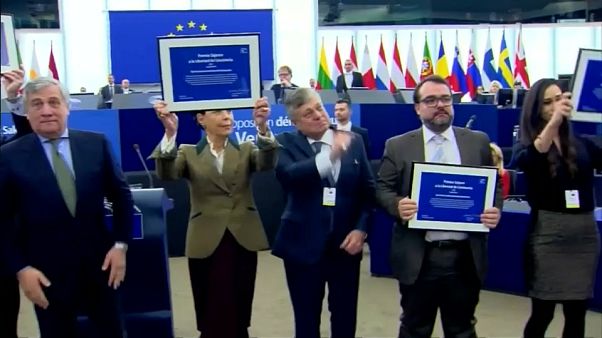 Members of Venezuela's democratic opposition have received the European Union's human rights award during a ceremony held at the European Parliament in Strasbourg.

The prize, named after Soviet physicist and dissident Andrei Sakharov, was awarded to Venezuela's opposition-led National Assembly legislature, which the government has stripped of powers, and all political prisoners, EU parliament President Antonio Tajani said.

Julio Borges, head of Venezuela's National Assembly, said the prize honoured the memory of the '157 Venezuelans assassinated by brutal government repression' during the protests the opposition organized in 2017.

Venezuela is suffering from a harsh economic crisis and President Nicolas Maduro's government has clamped down on the opposition, jailing or otherwise barring from office many dissenting leaders and activists.