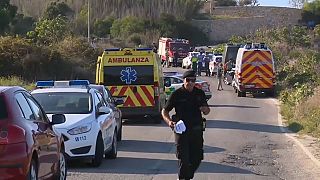 Maltese police have released video footage of a joint security operation that led to the arrests of ten suspects over the October 16. car bomb murder of investigative journalist Daphne Caruana Galizia.

The arrests, made in an operation coordinated among the Police Corps, the Armed Forces of Malta and the Security Services, were the first known break in the inquiry that has drawn widespread outrage and condemnation.

Investigators have 48 hours to question the suspects to decide whether to seek charges, in accordance with Maltese law.

Caruana Galizia, whose reporting focused heavily on corruption on the EU island nation, was killed when a bomb destroyed her car as she was driving near her home.