There is still time to change the direction and ensure that human rights are respected, but the point of no return is quickly coming into sight.

“A beautiful sight”, said Poland’s Minister of the Interior. He was describing the scene in central Warsaw last Saturday, where marchers brandishing racist and fascist symbols, some with banners carrying the message that “Europe will be white or deserted”; and members of far-right groups and their sympathizers were holding torches and throwing firecrackers. The battered bodies of women who bravely held their own peaceful protest against the hate on display were yet another visceral symbol of the intolerance shown by the marchers. To describe racism, xenophobia, and misogyny as “beautiful” demonstrated a short memory from a minister in a country with a proud history of fighting back against Nazism.

When such hatred is condoned right from the top, from a high-level government official, who will hold those who espouse it to account? What defence is there against policies that infringe on human rights, undermine the rule of law and permit racism to go unhindered? The European Union was founded to avoid precisely such situations, but while the EU institutions have been vocal, including after Saturday’s march, concrete action has not been forthcoming.

The government of Poland has got its yellow card. But if the authorities go ahead with reforms that undermine the independence of the judiciary, and continue with the crackdown on peaceful protests, NGOs, women and girls’ rights, refugees, and many others, it may yet get a red one. The vast majority of Members of the European Parliament present voted in favour of a strongly-worded resolution. They also called on the Polish government to condemn the xenophobic and fascist march that took place in Warsaw on November 11.

But so far, we have seen too little from the Polish authorities. That the police concentrated their efforts on those who were protesting against racism and fascism already speaks volumes. Far from a ‘beautiful day’, Amnesty International’s observers witnessed ugly scenes in Warsaw that day – with the police lined up in force against those who came out peacefully in support of human rights and the rule of law.

It may seem counter-intuitive that the police would turn their back to the torches, and towards the peaceful protesters raising their voices against racism. But recent changes to the law mean that the authorities can prioritise certain protests over others. 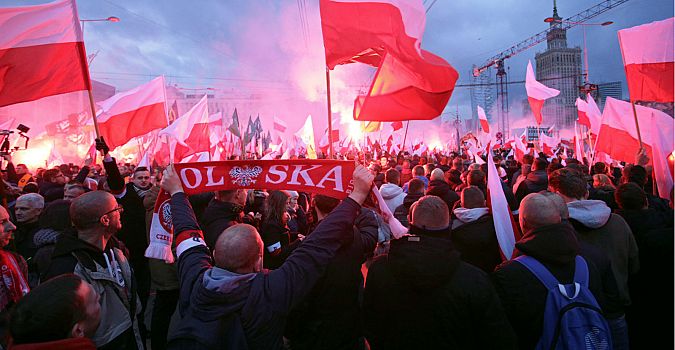 The independence march has been held regularly and therein lies the crux of the problem. ‘Cyclical assemblies’, as described in the law, are those that happen regularly, at the same time and place for at least the past three years, and are now given priority over other types of demonstrations. Giving priority to one form of expression over another, without any attempt by the authorities to reasonably accommodate both assemblies, is in breach of international law and standards on freedom of assembly and expression.

The police not only failed to facilitate the counter-protest, they went even further and removed, by force, a group of about 50 individuals peacefully holding banners that read “Here are the borders of decency”, “Warsaw is disgraced” and “My motherland is humanity”, and then held the protesters in police custody for three hours. The majority of them are now facing charges for interfering with a lawful assembly.

A ‘beautiful sight’ was also not how a group of 13 women activists described the Independence march. These women peacefully joined the march with a banner saying “Stop fascism” and they were met with violence by some Independence Day marchers. Agnieszka, one of the women protesting that day, told Amnesty International that “…they started kicking us, calling us names and eventually removed us from the route. It’s not that we wanted to stop or block the march, we simply wanted to show them our message and leave”.

Elżbieta another activist, further explained to us the distinct approaches taken by the police.
“When we are organizing the Black protest events for women’s rights, the counter-protesters come to us and call us names or tell us we are murderers. The police protect them.” But that protection was not extended to the women when they protested on November 11. “The attackers first pulled away our banner, then started tearing our clothes and kicking us. I was kicked several times in my back. There were some people, including the organizers of the Independence March, who protected us”. One of the activists called the police to report the incident. “They came after 30 minutes and asked us why we came there, implying we were provocateurs.”

Ahead of the Independence Day march, the Minister of Interior announced the police were well prepared to ensure public order. Yet the police on site ignored instances of incitement to violence and the use by many marchers of the Nazi salute.

The Polish government has embarked on a dangerous route. There is still time to change the direction and ensure that human rights are respected, but the point of no return is quickly coming into sight.

Barbora Černušáková is a researcher on Poland at Amnesty International

The views expressed in opinion articles published by Euronews do not represent our editorial position. If you want to contribute to our View section, email ideas to: view@euronews.com