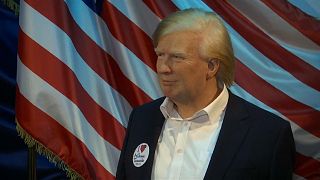 Madame Tussaud’s in Berlin says public demand is to blame for its newest exhibit, a waxwork of Donald Trump. With vital statistics provided by the White House no visitor should doubt the size of the effigy’s hands, and the museum says it has no worries for its safety.

“It wasn’t actually our decision. It was the wish of our visitors. We regularly ask visitors on terminals at the end of the exhibition ‘who did you miss? Who would you like to see? Who belongs to the Madame Tussauds Berlin exhibition?’ He has been at the top of the list of most missed figures for the past 14 months,” said the museum’s spokeswoman Nina Zerbe. “That’s why we said, if this is the case, if this is what the majority wants, we won’t get in the way. So we started working on the figure and for four months, 16 specialists worked on him to look as real as he does now. I do believe – and we already witnessed it in some of the reactions – that this is a real life Trump copy.”

What does Zerbe have to say to people who complain they see far too much of Trump already, and don’t want to be reminded of him in Berlin?

“With every new figure here, people ask ‘why is he here? Does he deserve to be here? Is it right? Is it wrong?’ It will again happen with him because he is a human being who polarises. But we said we are democratic. We follow the wish of our visitors and I don’t expect any controversy whatsoever. There are people here like former East German dictator Erich Honecker, people who are controversial. Nothing happens to them either and there are no extra security measures for them. At the end of the day we hope people will see what an art it is to create such a real life figure and that they treat the wax figure with respect.”