The Catalan poet Joan Brossa once wrote: “People don’t realise its power: a week-long general strike would be enough to cripple the economy, paralyze the state and show that that the laws it imposes are unnecessary.”

On Tuesday, under a resplendent sun, the people of Catalonia set out to test at least a part of his assertion. Far from the grey skies and tension of two days before, when riot police and voters had clashed, Tuesday saw spontaneous chants, jokes and a sense of unbridled freedom.

In pictures: General strike in Catalonia 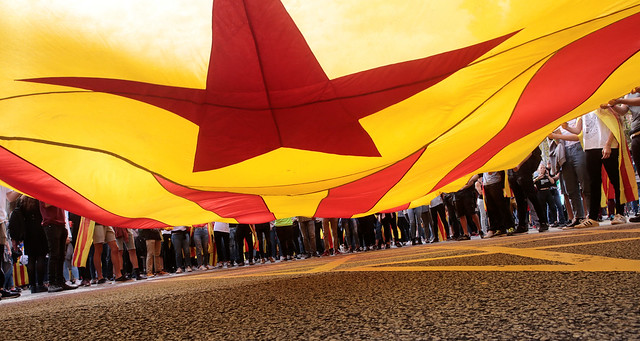 Technically there was no strike but instead a ‘stoppage for the country’. At 7am Catalonia’s main roads were already blocked in several areas. From 11am the metro ground to a halt. With the roads impassable due to the crowds, the rest of the public transport network wasn’t going anywhere either.

Catalan television began by observing the strike but soon decided that proceedings at reached a stage where testifying to the event would be a greater act of solidarity than adding a few off-duty journalists to the crowds. So the emergency coverage plan transformed into a breaking news show that lasted almost the entire day. On TV, those who couldn’t or didn’t want to take to the streets could see the columns of people passing the police station in Via Laietana while proclaiming that the building would become a library, a civic center, a supermarket or anything else once independence arrived. The footage also united the midday assemblies held in Girona, Barcelona, Lleida, Sabadell, Manresa, Vic showing squares overflowing with people.

Two demonstrations were called during the afternoon in Barcelona: one in Jardinets de Gràcia, and the other at the Plaça Universitat. Both were called at the same time: 6pm. At Jardinets Alberto, a young lad from Esplugues de Llobregat, is already in place with his friends well before the scheduled start time holding a Spanish republican flag. He had voted ‘no’ in the Oct 1 referendum and was one of many thousands of voters who kept watch all day in front of the polling station for the Policia or the Guardia Civil.

In the surrounding streets a driver, perhaps in a hurry, perhaps unsympathetic to the cause almost runs over a demonstrator before speeding away with one figure raised.

Back at Jardinets again, another boy is wearing a Spanish flag as a cape. Asked if he feels unsafe wearing amid so many estelades, he answers no, he is not far from home. The TV pictures show Spanish flags, alongside estelades and there is no sign of trouble.

The crowds sharing their views on Instagram start to choke up the mobile network and there is a river of people flowing to crossing with Consell de Cent, where they collide with a separate crowd. The reports come through about King Felipe VI’s evening address but no one seems concerned. “It was about time for the King to speak,” people say.

Reaching Balmes and Gran Via, it becomes impossible to move. Everywhere is choked with people and the 3G fails again.

Once the gathering is over, there is no rush to get home. “Els carrers seran sempre nostres”, someone sings, because the streets belong to the people.