Four people are said to have died in another earthquake in Mexico, measuring 6.2 on the Richter scale. This comes less than a week after Mexico’s capital was hammered by a magnitude 7.1 quake that flattened dozens of buildings and killed at least 307 people.

BREAKING: A 6.1 magnitude #earthquake was reported in #Mexico this morning. Days after a 7.1 killed hundreds. pic.twitter.com/i4PlYv2USw

Although the latest quake was not as destructive, fear is running high among the population. Terrified residents crouched
and prayed when the alarms went off and two women apparently died of heart attacks as the ground shook.
The Popocatepetl volcano, which is visible on a clear day to the approximately 20 million people that live in the Mexico City metropolitan region, spewed vapor and ash-filled gas after two small eruptions. 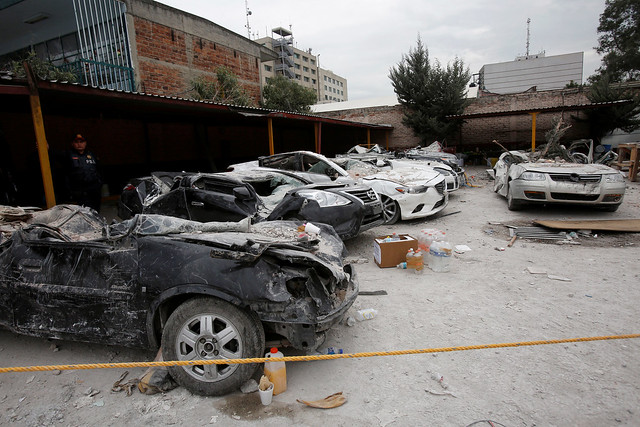 The search for survivors in the rubble had to be suspended, but it was quickly resumed, as hopes fade a little more for every hour that passes.

Meet Frida, the four-legged heroine using her sense of smell to search for earthquake survivors in Mexico https://t.co/CncrA4w1z1pic.twitter.com/c4klIIfSe6

Adding this human loss to a possible 8 billion dollar rebuild cost, people are now beginning to scrutinise the government’s response ahead of a presidential election next year.
Tuesday’s quake hit on the anniversary of the deadly 1985 tremor that by some estimates killed 10,000 people. A government response panned as lacking at the time severely damaged the credibility of the ruling Institutional Revolutionary Party. Mexico is now better prepared to deal with the aftermath of earthquakes, helped by disaster planning, civic groups, a stringent building code and communication technology.