Transport policy, the “diesel scandal” and the interests of the German automotive industry is a hot topic of debate that is dominating the German election campaign.

We are in Stuttgart, meeting Manfred Niess protesting together with neighbours against air pollution. The retired teacher lives close to Germany’s dirtiest crossroad, the “Neckar-Tor”.

Niess is the nemesis of diesel defenders.

In 2005 he filed a lawsuit on the of high levels of particulates in the air, and followed this with another in 2010 over the exceptional nitrogen oxides levels generated by cars.

“What’s the problem? Here in Stuttgart – but also in many other cities – the population is poisoned by air pollutants, says Niess.

“I want people to live in a safe environment: Depending on which survey you read, people living in Stuttgart lose two up to nine years of their life – just because they live here, in this city. In Stuttgart, the automotive industry is the real ruler of the region.

“The government tries to be a kind of servant to the automobile industry…well, not just trying – in fact they are.” 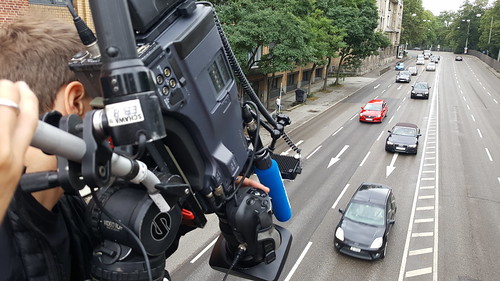 The European Environment Agency estimates that each year 10,000 people perish prematurely in Germany due to diesel-generated nitrogen oxides, but these figures are contested.

We meet Erik Sturm, an artist. Germany’s dirtiest crossroad is the place to be for him. Contemporary artists such as Joseph Beuys, Marcel Duchamp, Jeff Wall all worked with dust, making the invisible visible… So does Sturm:

“Here I discovered a material which I call the Neckar-Tor-black. It is a very fine dust and you find this dust here, at the Neckar-Tor, there are large deposits of it. This dust gets between everyone’s teeth. Here I found a fair amount of it and I am going to transform it into a piece of art.”

That's the way to do it:- Stuttgart judge demands diesel bans from 2018, ruling retrofits will not tackle pollution https://t.co/kvldbY7PTZpic.twitter.com/lEhUeGALsw

While Sturm works on his special pigment, let’s see where the political parties stand on the motor industry and pollution.

The GREEN party wants to banish combustion motors by 2030.

Angela Merkel from the CDU was heard saying that combustion motors will keep on running for “some decades”.

“Well, the colour Neckar-Tor-black is almost ready now… Here it is, a piece of Stuttgart, a part of the city. It is a renewable raw material. You could produce this special colour without end, because this material will be still there for quite some time…”

The professor worked for years for a leading German carmaker, developing exhaust gas treatment systems. Today, he teaches . In his opinion, diesel technology is demonised by the media and politicians – while electro-mobility is overestimated. Combustion engine technologies will survive – thanks to synthetic fuels. Dittler says diesel still has a future, because new diesel motors are clean.

“We have no lead and no sulphur dioxide in the air any more. All those air pollutants, those neurotoxic substances have disappeared, today. That’s why I can’t understand why we are having this fierce debate today.

“When you look at the full picture, we see very clear improvements. – And even if you were to shift towards battery-driven cars, you would still have tyre and brake particles set free through abrasion. Electric cars and clean diesel cars both give off fine abrasive dust, it’s just the same.”

Social entrepreneur Jan Lutz believes in open data. How much particulate matter is there in the air? Lutz and his son need 12 minutes to assemble their air pollution analyser.

The do-it-yourself-manual is on internet: Thanks to him Stuttgart will be covered by a network of shared data analysers soon. Lutz message: don’t be afraid to do what needs to be done to save the world’s climate. Just do it. And do it now:

“Now we are in need for a quantum leap, for a great leap forward: we need a city without cars. – Real changes are possible regarding short-range mobility: Loads can be transported by special bicycles. In the future city you will move by foot and by bicycle.”

Lutz is among thousands of cyclists, who regularly demonstrate their power and will to change… by paralyzing the Stuttgart car traffic.

If politicians do not decide on how to combine mobility needs and health concerns, law courts will do so. Diesel cars could be banned from city centers soon.

“Will Germany change its energy and transport policy? We will have our response after this upcoming parliamentary election.”