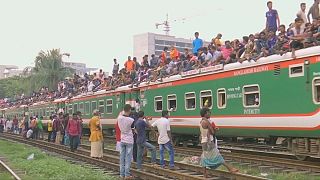 Crowds of passengers climbed onto overcrowded trains in Dhaka on Friday (September 1) as millions in the Bangladeshi capital returned to their hometown in the lead-up to Eid al-Adha this weekend.

Eid al-Adha, or “Festival of Sacrifice”, is an important religious festival that falls on Saturday (September 2) in Bangladesh. It is observed by Muslims to commemorate the willingness of the prophet Ibrahim to sacrifice his son Ismail as an act of obedience to God, before God replaced Ismail with a ram to be sacrificed instead.

Millions of animals are sacrificed across the Muslim world during the festivities.

Bangladeshi Muslims mark it with a huge feast during the four-day public holiday period from Friday to Monday.